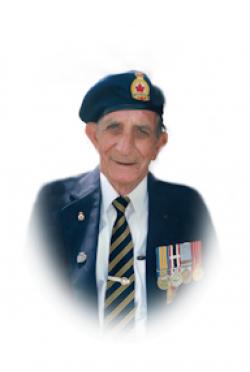 Williams - The death occurred peacefully at Andrews of Summerside, PE, on Monday, May 4, 2020, of Robert "Bob" Williams, of Summerside, PE, aged 87 years. Bob was a proud member of Royal Canadian Navy having enlisted  February 20, 1951 and honorably discharged April 17, 1976. Bob was a Korean War Veteran and was awarded the UNITED NATIONS KOREAN CANADIAN FORCES DECORATION IN 1954 while serving on HMCS HAIDA. Upon retirement from the Navy in Halifax, Bob pursued other careers which led him to be a repair technician for Hughes-Owens, a Commissionaire for Volvo in Halifax and after settling on the Island, a Commissionaire for Summerside Royal Canadian Legion.  Bob retired from the Commissionaires and settled in to life in Summerside. One of his great pastimes was being a life member of The Silver Fox Curling & Yacht Club where he spent many years volunteering on various events.  His best Silver Fox memories though were of his grandchildren curling. "Poppy" spent many weekends sitting behind the glass watching tournament games and being quite vocal over shots, whether good or bad. But above all else, he was especially proud of being just "Poppy" to all. His grandchildren adored him and will forever cherish his hand written little notes , his sage advice and his unconditional love. Predeceased by parents Henry and Ethyl (McDevitt) Williams of Saint John, NB; brothers Donnie, Ronnie, Georgie, Gerry; and by sisters Clara, Marie and Sandra. Left to mourn are his children Sheila (Gerry) vanOuwerkerk, Summerside, PE; Kimberly (Douglas) Beauregard, Kent Island, Chester Maryland, USA; Dale (Kimberly) Williams, Middle Sackville, NS; and Wayne Williams, Miramichi, NB; dearly loved  grandchildren Steve, Nick, Jess, Amanda, Alicia, Samantha, Andy, Jillian, Alex and Liam; beautiful great-grandchildren Layla, Evan, Colton, Bennett, Peyton, Ashton and Rhett;  dear lifelong friend of 65 years Blanche Williams, Dartmouth, NS;  brothers  Buddy, BC; Freddy, ON; and Johnny, NB;  sister Theresa, NB; and  numerous nieces and nephews. Dad was always so grateful for the care and compassion of PCH  nurses, the Home Care nurses and Dr. Moyse. Our family would also like to thank the excellent care he received from Andrews of Summerside and Dr. Hal McRae. Resting at the Moase Funeral Home, Summerside, PE. Dad’s Celebration of Life will be announced later. Memorial donations to the Poppy Fund at your local branch of the Royal Canadian Legion would be appreciated.