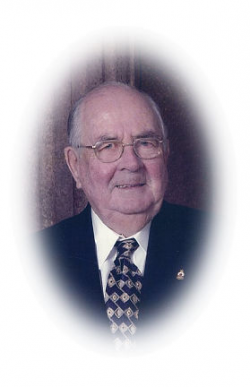 D. Alex and Kay were married in 1950 and he soon found his calling in the car business. In 1957 he opened a used car dealership and four years later received the Ford Franchise for the Summerside area. D. Alex and his family would build a successful business, by focusing on great customer service and supporting the local community. He credited his wife Kay for many of their accomplishments. He was proud that many of his 11 children and grandchildren worked alongside him in the family business. D. Alex never really retired and remained a daily visitor at the dealership until the day before his death.

D. Alex was active in the community, serving as a Summerside councillor, past chair of the Prince County Family Welfare Agency, member of the building committee of the Silver Fox Curling and Yacht club and many more community organizations.  D. Alex was inducted into the Junior Achievement PEI Business Hall of Fame, a recipient of the Queen’s Jubilee Award and the George Key Sr. Summerside Citizen of the Year Award.

D. Alex and Kay were both inducted into the PEI Curling Hall of Fame in 2007.  They were extremely proud of their children’s success in this sport at the provincial and national levels. D. Alex enjoyed watching the Summerside Western Capitals and rarely missed a Maple Leaf or Blue Jays game on TV.  He also enjoyed his weekly card games with his friends.

Live stream video of the Funeral Mass can be viewed on St. Paul's Parish Facebook page.