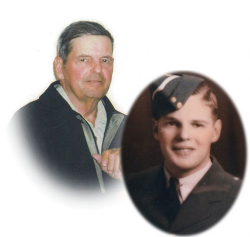 Ed was a Wireless Air Gunner (WO/AG), and flew mostly on Lockheed Hudson Aircraft. During the war, the 269 Squadron patrolled the oceans looking for German U-boats and anti-shipping boats. They were on constant watch for U-boat and shipping harbour attacks, and were on surveillance to pick up survivors from downed aircraft.

Edwin started his service in Canada and was attached to the RAF #31 Operational Training Unit (OTU) in Debert, Nova Scotia, training on the Hudson Aircraft. He then went to the OTU in Yorkshire, England, and over the next four years moved on to bases in Iceland, Northern Scotland, back to England, Gibraltar and the Azores, patrolling the skies and waters in the North Atlantic and South Atlantic. His Squadron was highly mobile, and he was stationed for brief periods of time in England at Bournemouth, Thornaby (training in rockets), South Hampton, Torquay (teaching wireless operators), Penzance, East Fortune Iceland and Turnbury, Scotland.

Edwin’s family would be honored to have family and friends join them in celebrating a life well lived. Resting at Moase Funeral Home, Summerside, where  a Celebration of Life Service will be held on Friday, at 10:30 a.m. Interment will take place later in the Beechwood Cemetery, Ottawa, where he will be buried with his comrades, in Section 103 at the National Military Cemetery of the Canadian Forces, which honours the men and women who served Canada. Members of the Summerside Branch of the Royal Canadian Legion, together with members of the RCAF Association, will hold a Service of Remembrance, at the funeral home, Friday, at 10:30 a.m., immediately followed by the funeral service. No visiting hours by request. Memorial donations may be made to Branch #5, Royal Canadian Legion, Summerside - Poppy Fund or a charity of your choice would be appreciated.