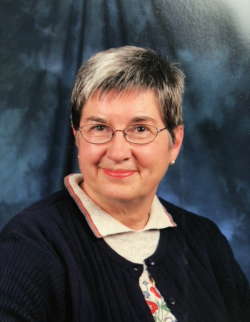 Visitation Information
Visitation
No Visitation by request.
Service Information
Service Location
No Funeral by request.
Requested Charity
Memorial donations to the PEI Humane Society would be appreciated.
Make A Donation

Mellish - Anne passed away peacefully at the Prince County Hospital on Saturday November 19th after a long battle with Dementia.

Anne was born in Saint John, New Brunswick on October 4th, 1941. She was the only daughter of Helen (Fales) and Gerald Emerson. After her father passed away, Anne became part of a blended family and gained a brother and a sister, both of whom she cherished.

Anne graduated from Netherwood School and continued her education at the University of New Brunswick. She later earned her teaching certificate and focused on special education.

Anne’s lifelong passion was education. She began her teaching career at Athena Consolidated in Summerside. When Anne later transferred to Summerside Intermediate School she began working with students with exceptionalities. Inclusion was an important part of Anne’s teaching practice and she worked hard to ensure that each of her students achieved their full potential. She was a quiet advocate for each and every one of her students and was a crucial part in developing the Special Education program on PEI.  In her retirement, Anne dedicated her time to Adult Education programs.

With the help of her mother and aunt Ethel, Anne was introduced to the love of her life, Peter, whom she married in 1962. They started their careers and their family in Cape Breton, but soon after moved to Summerside, PEI. Anne devoted her life to her family, and they shared many wonderful years on their family farm, sailing the high seas and running a family business together. One of Anne’s proudest moments in life was becoming a grandparent and she adored spending time with her two grandchildren and their cousins.

Anne lived every day of her life giving to others. She was authentic, genuine, loving and kind. She always had a warm smile and kind word for everyone she met.

Anne was predeceased by her husband Peter in February of this year. She is lovingly remembered by her two sons, Peter (Carolyn), and Stephen (Jane Hicks). Her grandchildren Amanda (Andrew Hughes) and Ben (Maddison Fisher). Sister Susan (John) Morley and brother Robert Dykeman.

By family request, there will be no visiting hours or service. Completion of funeral arrangements entrusted to Moase Funeral Home, Summerside. Donations in Anne’s memory can be made to the PEI Humane Society.